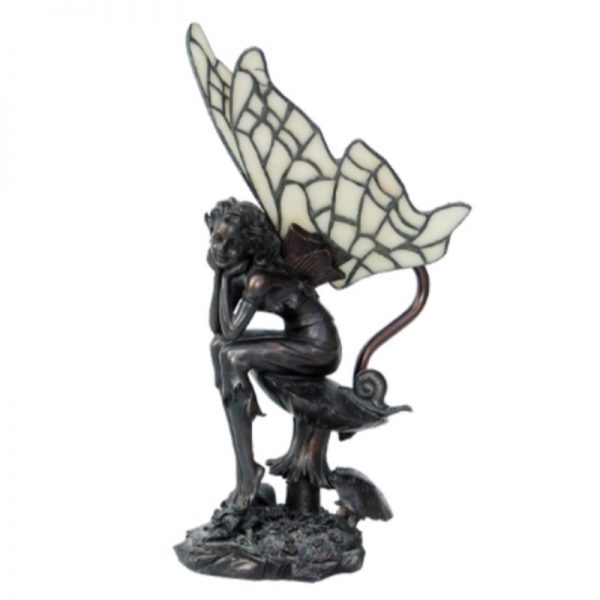 Short description of that product pending. If you need more information now please call or email us to discuss.

A fairy on a mushroom can make a fabulous girls bedside lamp!

Fairies have frequented the imagination of children since the middle ages and provide a fun opportunity to add a little magic to bedtime. There is no better light than a fairy light for a girls bedside lamp, to provide a soft ambiance while telling fairy tales at night! The Three Bears, Snow White, Rumple Stiltskin, and your own little fairy lover drifting off to sleep…

This pewter finish fairy on a mushroom lamp features a sitting fairy, elbows on knees, chin in hands with wings stretched high. She is the perfect muse for an original fairy tale of magic, fantasy and adventure!

Tinkerbell is the most famous fairy of? contemporary times. She made her debut in 1904, a minor fairy tale herself in? Scottish author J.M Barrie’s play Peter Pan. The play was a success. Barrie expanded it into a novel in 2011 called Peter and Wendy, which later expanded into the many Peter Pan fables we know today.

Fairies and mushrooms are as synonymous as Peter Pan and Tinkerbell. Fairies were blamed across Europe whenever particular mushrooms would grow in circles known as a fairy ring. They look like little fairy towns to an imaginative child and have featured in literature as far back as the 13th century, and in famous works including Shakespeare’s A Midsummer Night’s Dream.

To see more fairy lamps or other girls bedside lamp at Prosperous Home click here. To advance your fairy fun we like The Pickled Fairy in Fremantle WA.

This lamp was assembled by hand. As a result, actual colours and designs vary slightly from item to item. This adds to the unique beauty and character of the lamp.