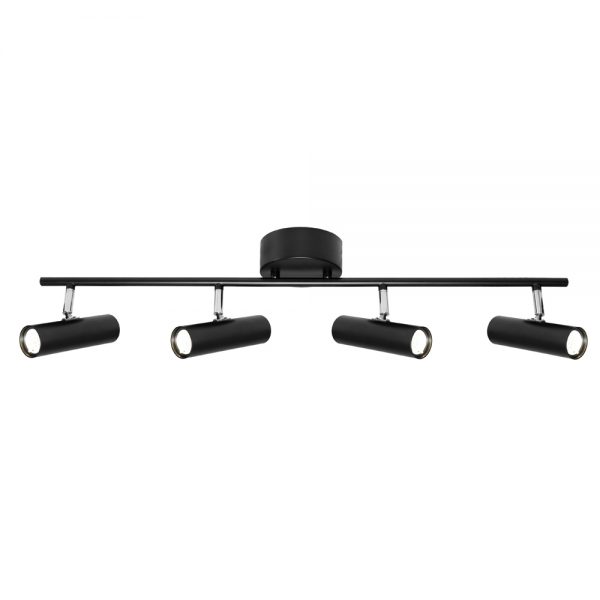 The vector four light 20w rail black is a ?modern style? bar of four spotlights in a black and chrome finish.

Le Corbusier a founder of the modernist movement in architecture called the home a machine for living in. And mid century modern kitchen design followed this no frills minimalist mantra. The vector four light rail is a good example of mid century kitchen lighting. As it is designed in the modernist style, colours and material palette.

The light is the quintessential embodiment of mid century modern lighting and is part of a series featuring a range of sizes. As a result, this light could fit aesthetically in Mies Van Der Rohe’s Barcelona Pavilion, or above an Eames chair. It suits task lighting in a mid century kitchen.

In the time after modernism, controversy remains around this light’s style. Many believe the earth is reeling from its negative environmental effects, trying to use machines to overcome the environment. Modernists efficient column and beam system was the precursor for the modern commercial curtain wall building, which is widely regarded as an environmental disaster due to its climatic insensitivity. And attempts to overcome critical regionalism and culture with an international style have also had environmentally devastating effects. To read more about the ideological discussion surrounding this light’s style click here.

thankfully modernism left us a few good things. Vector four light mid century kitchen lighting being one of them.

The light is available in both black and white finishes. To see other rail spotlights click here.

Each spot features a 5 watt LED cob light. The total light produced by the four light is 1920 lumens. The spotlights themselves are black metal tubes with glass lenses at one end.

The light features a black circular ceiling cap supporting a 770mm long black bar hanging on two small supports. It is 120mm wide and projects 180mm from the ceiling.

We recommend fitting the light with a Clipsal or dimpala trading dimmer.

All options are also available in white.